Eklingji is better known for a Hindu temple complex in Udaipur District of Rajasthan in western India. Eklingji is believed to be the ruling deity of Mewar Princely State and the Ruler Maharana rules as his Dewan. According to the 15th century text Ekalinga Mahatmya, the original temple at Eklingji was constructed by the 8th century ruler Bappa Rawal.[1] The original temple and murti (idol) were destroyed during invasions by the Delhi Sultanate rulers. The earliest extent murti was installed by Hamir Singh (14th century), who also carried out extensive renovations to the main temple. Rana Kumbha (15th century) rebuilt the temple, in addition to constructing a Vishnu temple. His 1460 inscription describes him as "the personal servant of Eklinga. Some of the beautiful place near Eklingji temple that make it best tourist place are:

Saas Bahu Temple: The Saas-Bahu Temple is dedicated to Lord Vishnu and is made of two structures, one by a mother-in-law and another, by a daughter-in-law. Both the structures have an altar, a mandapa (columned prayer hall) with projections and a porch. Comparatively smaller than the temple of Sas, the 'Bahu' temple has an octagonal ceiling, which is adorned with eight intricately carved female figures. In its front, the 'Sas' temple has a torana (archway).It is widely believed that the image of Lord Vishnu was swung from the torana along with hymns in the praise of the lord on ceremonial occasions. Facing towards the east direction, both the temples are constructed on a common platform. 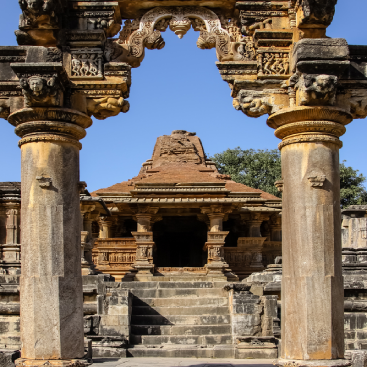 Sun Temple: The sun temple at Ranakpur dates back to the 13th century CE. After its destruction, it was rebuilt in the 15th century. This temple built in the classic Nagara style exhibits a profusion of intricate sculptural work. It is built of white lime stone, and is very intricately ornamented. This temple faces east, and it has a sanctum crowned with a shikhara, and an octagonal mandapa preceding the sanctum. The octagonal mandapa has six verandas. The projections on the exterior of the sanctum are sculpted with images of the Sun God seated on (a chariot of) rearing horses. Also in Ranakpur is the grand temple complex dedicated to the Jain Thirthankara Adinatha - the Chaumukh temple with 29 halls with 1444 pillars no two of which are alike. 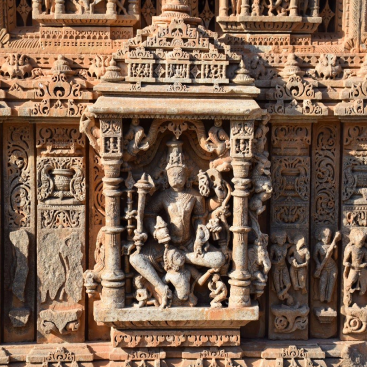